Sometimes, even though your plate might be full and your days jam-packed, you need to step off the hamster wheel of life and do something ridiculous just for the fun of it.  September was an incredibly hectic month for us.  It included completing our last camping trip of the season (almost two weeks), emptying out the travel trailer for the winter and packing away the camping gear (which felt like almost two weeks), dealing with some medical issues (don’t worry, nothing serious, just tedious), helping our son and his girlfriend move into the house they just bought, and working on projects with them.  (“Hey, what are you guys doing tomorrow?” – a loaded question if ever we heard one.)  Let’s just say that I got tired of “adulting” and simply wanted a chance to play.

At the Outdoors RV Owners East Coast Rally in August, a bunch of us were discussing items that we had a hard time finding in the early months of the pandemic.  When I mentioned I had a difficult time finding RV toilet paper, several people commented that they didn’t use toilet paper specific to RVs; they used whatever brand they used at home - like Charmin or Scott.  Hmmm.

Alan and I always bought RV toilet paper because we figured it broke down most easily in the black water tank.  At this point, I'll digress a moment for the sake of anyone who may not be an RVer . . . RVs generally have one tank for fresh, potable water, one tank for black water (that holds water and, um, other stuff, flushed down the toilet) and at least one tank for gray water (that holds water from the kitchen and bathroom sinks and the shower).  The black and gray water tanks are called “holding tanks” because they simply hold sewage and used sink and shower water until the tanks can be emptied into a sewer hookup at a campsite or at a dump station in a campground or at a gas station.  I can assure you that RVers do NOT want to clog their black and gray water tanks due to the mess that can ensue, so we tend to be especially careful about what we put in them.

Once our buddies got me thinking, I decided that it was time to run The Great Toilet Paper Experiment.  Have you heard the advice, “trust but verify?”  Yeah, well, I rarely trust and I always verify.  So, it was off to Wally World to buy some toilet paper.

Allow me to introduce you to the test subjects in The Great Toilet Paper Experiment:

This is the toilet paper we use at home.  We buy it in bulk (45 rolls to the package) because all of us (Alan, Kyra and I) like it.  It’s 2-ply and labeled “Septic Safe.” 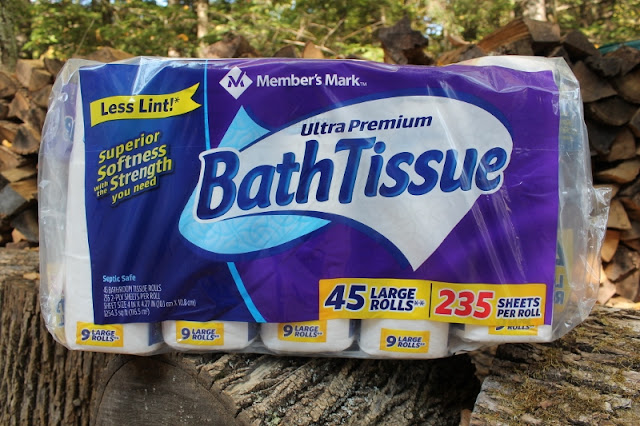 This was the least expensive (and possibly the worst made) toilet paper I could find at Walmart.  It’s 2-ply (the individual plies didn’t even line up) and labeled “Safe for Standard Septic Systems.”  If anyone knows what a non-standard septic system is, please let me in on the secret.  On second thought, don't. 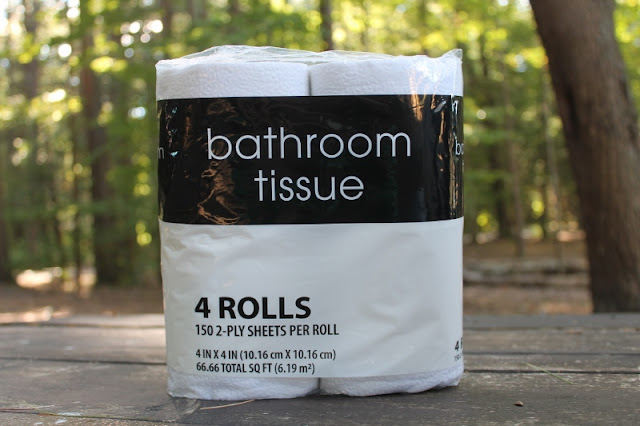 This is the toilet paper we have generally been using in the travel trailer.  In non-pandemic times, I can find it at Walmart and Camping World.  It’s 1-ply and labeled “Quick dissolve tissue recommended for RV/Marine sanitations systems” which is puzzling because most RVs have only holding tanks, not any type of sanitation system.  This is the product that I would expect to break down the quickest. 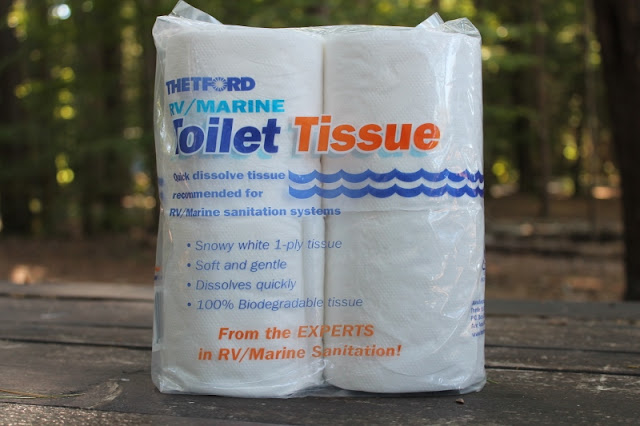 I believe that Scott markets a toilet paper specifically for boats and RVs, as well as a super-soft or ultra-comfortable premium product, but this is the plain old 1-ply Scott’s from the toilet paper aisle, and it was labeled “Clog Free/Septic Safe.” 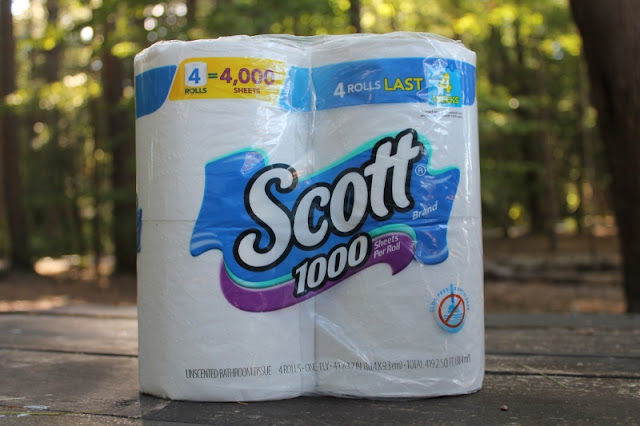 The set-up:  I am nothing if not completely inept and unqualified as a scientist.  For this fly-by-the-seat-of-your-pants experiment, I simply filled four clear, plastic food storage containers with two cups of water each, and gently placed one square of each of the test subjects into their own little holding tank.  If you’d prefer a professional science experiment, feel free to wave good-bye and go watch an old Bill Nye the Science Guy video.  Or visit YouTube and watch one of what seemed like 2,493,325 videos of this same experiment.  Please note that the quality of the photos included with this post is somewhat inconsistent.  With the light in our dining room changing throughout the afternoon, it was pretty difficult to nail down truly comparable shots.

After 30 minutes:  There were no visible changes to any of the test subjects, and all four remained in one piece.  The Cascades and the Scott were still floating, the Thetford was still at the bottom of the container, but the Member's Mark was now only partially floating.  Interesting.  I won’t bore you with the photos.

After one hour:  There were no visible changes to any of the test subjects, and all four remained in one piece - until I stirred them somewhat vigorously with a fork.  Now, let’s be clear people.  Alan and I DO NOT stir our toilet paper with a fork – or anything else for that matter.  I was simply trying to imitate what might happen to the toilet paper as it was flushed down into the holding tank.  If you have a better idea, feel free to execute your own experiment and report back.  I expected the Member's Mark would hold up better than the others because it’s a thicker 2-ply toilet tissue.  I also expected to see the Thetford and Scott to break up the most simply because they’re 1-ply products.  I wasn’t sure what was going to happen with the Cascades.  Although it’s a 2-ply toilet tissue, it didn’t appear to be well-made.  In addition to the misaligned plies, the paper wasn’t tightly wrapped around the cardboard core.  Very sloppy.  And it only cost me 60 cents for four rolls.  An example of “you get what you pay for,” perhaps?  Plus, the brand name doesn’t even appear on the front of the package; it’s simply identified generically as “Bath Tissue.”  I must say, however, that the Cascades did get bonus points for being the prettiest product with its embossed floral design.  Because, after all, I always stare at my toilet paper before I use it.  Sigh.  As for what actually did happen, the Member's Mark held up the best just as I expected that it would.  And the Thetford and Scott did break down the most.  Interestingly, the Cascades actually held up pretty well – not quite as well as the Member's Mark, but not bad either.  Note, however, that “holding up well” is not an advantage when you want your toilet paper to break down as quickly as possible.  After setting the kitchen timer, I made myself some lunch, caught up on some emails and updated some financial records.  I point this out only because I don’t want you to think I sat around watching toilet paper dissolve which, I imagine, would be about as exciting as watching paint dry.

After three hours:  There didn’t seem to be any visible changes to any of the four test subjects, but now the Cascades was the only one still floating.  I wonder what that means.  At that point, I put a lid on each of the containers and sloshed the contents around hoping to imitate what goes on in the holding tank as we’re driving down the road to the dump station (as if anybody would know).  Here’s what I noticed:  The Member's Mark broke down more than I thought it would, but there were still some fairly large, thick pieces.  Again, that didn’t surprise me because the Member's Mark toilet tissue was the plushest product.  The Cascades didn’t break down much more than it already had after I stirred it with the fork.  Now what kind of paper do you suppose is in that stuff?  Probably old recycled bank ledger cards from the 1950's or nullified union contracts with the ink (and controversial clauses) bleached out of them.  The Thetford seemed to break down pretty well into mostly smaller pieces with just a few larger ones that held on longer and stronger.  That’s pretty much what I would have expected of a 1-ply toilet tissue marketed to RVers.  The Scott toilet tissue, also a 1-ply, seemed to break down even a bit more than the Thetford and, coming off the roll, it wasn’t quite as scratchy either.  My face, folks, I tested it on my face.

A final test:  After I noted the results of “the sloshing test” for all four test subjects, I put a lid on each of the containers and shook them all pretty vigorously to replicate our travels on washboard roads, through construction sites and to back road campsites.  After I changed into dry clothes, I noted the following:  The Member's Mark was pretty much all broken down, but appeared almost cloudy due to its thickness.  The Cascades, even though it’s a 2-ply tissue, broke down pretty well into long, thin pieces.  The Thetford broke down into small, thin pieces, and the Scott appeared as if some of it had actually dissolved since it broke down into very tiny, thin pieces.

In summary:  Here’s what they all looked like when the experiment was over:


What I learned from The Great Toilet Paper Experiment:  I learned that it probably doesn’t matter much what brand of toilet paper you use, as long as you flush plenty of water down the toilet along with it; it probably doesn't hurt if there's a little sloshing around involved on the way to the dump station; and it probably doesn't matter what the results of this experiment were because, let's face it, most of you read this post just for the entertainment value.  (It's okay - I'm not offended.)  I honestly don’t think any of the four test subjects would clog up our holding tanks, so I feel pretty confident in buying any brand of toilet paper that feels comfortable to us and provides a good value, cost-wise.  But pay attention now because here’s the REAL takeaway:  I learned that (1) it’s exceedingly refreshing to step off the hamster wheel for a while and not take life (or myself) too seriously; (2) an activity doesn’t have to be complicated or expensive to capture someone’s interest or prove intriguing; and (3) making and taking time for fun and play – no matter how old we get or how busy we are – is a delightful way to honor and celebrate the children we once were and will be, forever, in our hearts.  I’ll be seeing y’all – gotta go buy some more Scott’s!

“Never, ever underestimate the importance of having fun.”   ~   Randy Pausch