This post represents another installment in the series detailing the second of our three cross country National Parks camping trips with travel trailer in tow.  At the time of this trip in 2010, our son, Ryan, was 16 and our daughter, Kyra, was 11.

Regular readers of this blog know that I spend a lot of time planning our travels, paying particular attention to campgrounds that are the best fit for our preferences and specific sites within those campgrounds.  Some people view a campsite simply as a place to catch some z’s and there is absolutely nothing wrong with that because they often are.  To me, the campsite is an integral part of our traveling experience, unless we’re specifically making time between point A and point B, in which case we do need just a place to rest our weary selves.  Yes, Wally World has been our “campground” of choice on more than one occasion.  But I enjoy selecting campsites that I know our family will really like and make the most of – whether that’s because of the seclusion, the view or the easy access to a lake or hiking trail.

Because I had identified Piñon Flats within Great Sand Dunes National Park as our go-to campground for this visit, I spent a great deal of time looking at the photos of the sites there on Recreation.gov.  Many had beautiful views of the dunes and the Sangre de Cristo Mountains behind them, but the sites tended to be smaller and there were not a lot that I felt we could comfortably fit in with our 30’ travel trailer.  I was having a difficult time deciding on a site based on what I was seeing on Recreation.gov and I had questions on more than one of the sites I was considering.  What to do?  Take a chance, book a site and keep our fingers crossed we would fit?  Play it safe and stay at a private RV park outside the National Park?  Neither one of those options appealed to me and I decided to try something I had never done before.


I called the Piñon Flats Campground directly, hoping to speak with someone who could provide a little guidance.  I was told that the Park Ranger who took the photos for Recreation.gov would be the best person to talk to but he wasn’t in at the time.  When the Ranger who had answered the phone offered to take my number so that her colleague could return my call later, I thought, yeah, I’ll bet.  Following a favorite precept of mine (Hope for the best; prepare for the worst), I picked out the site I planned to book if (when?) I didn’t hear back from the Ranger at Piñon Flats.

Much to my (very pleasant) surprise, the Ranger did call back later that day.  Not only did he answer the questions I specifically asked, but also those that I didn’t know enough to ask.  His love of Great Sand Dunes and Piñon Flats was evident.  He was clearly not in a rush and spent enough time on the phone with me to make sure I was going to book the best site for our family.  As it turned out, the site I had chosen was sloped to such a degree that he didn’t recommend putting a 30’ trailer in it.  And the site that I really liked but was afraid that a particular tree would prevent us from actually fitting in it proved to be the site he did recommend.  Long story short (well, I guess it’s too late for that now), based on the Park Ranger’s recommendation I booked an absolutely fabulous site at Piñon Flats.

You may recall that, in the last installment of this series, we enjoyed some wonderful adventures in St. Louis, Missouri.  From St. Louis, we traveled west and overnighted at a rest stop on Interstate 70 near Colby, Kansas, that had a couple of spaces set aside specifically for RVs.  Normally, we try to avoid sleeping in rest stops for a couple of reasons – (1) usually rest stops are not an oasis of peace and quiet and (2) unless it’s absolutely necessary that we stay in one, we prefer to leave the spaces for the truckers who have fewer options than we do.  This rest area in Kansas was quiet and, having spaces set aside for RVs away from the regular traffic, made for a good night’s sleep. 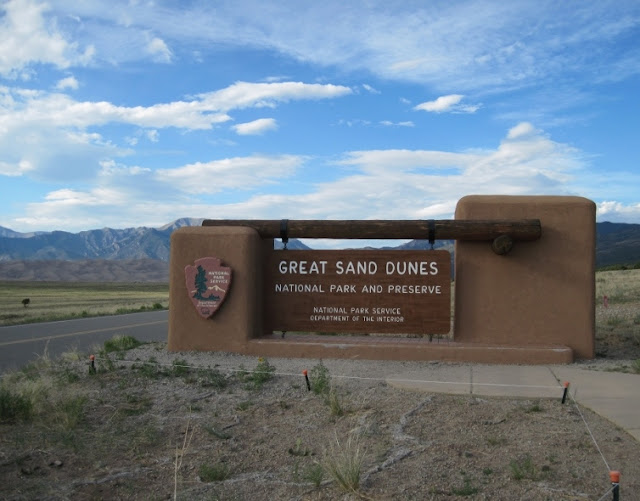 The next day, we arrived at Great Sand Dunes National Park and Preserve.  According to the National Park Service web site, when the Medano Creek which flows through the Park is running high (peak flow months are May and June), the campgrounds both inside and outside the Park fill up quickly.  Apparently, swimming in the Creek here is a popular activity.  But our attention was focused on the dunes.  They were spectacular!  In fact, they are the tallest dunes in North America and it’s easy to have tons of fun here.

Sandboarding and sand sledding, with special equipment specifically made to use on dunes like these, are popular activities in the Park.  (The National Park Service does not rent equipment, but several private businesses outside the Park do.)  Had we planned a longer visit, renting boards or sleds for the kids would have been on the agenda.  As it was, that didn’t stop them from having fun.  Running and tumbling down the soft sand dunes kept them occupied for quite a while, although we did hear one screech when Kyra encountered an insect-type critter that called the dunes home.  All four of us enjoyed Mother Nature’s giant sandbox immensely, whether hiking across the dunes or simply sitting on them watching the sun set, sifting sand between our fingers or rolling head over heels to the bottom of a sandy mountain.

Our visit to Great Sand Dunes emphasized the many different personalities of our National Parks.  Whenever we’re planning a visit to a Park that we haven’t yet been to, I always doubt it will compare to others we’ve visited in the past.  And yet, each new Park is full of its own spectacular scenery, unique features and memorable experiences.  To this day, Great Sand Dunes remains one of Kyra’s favorite National Parks.  I say “one of” because, really, how can anyone pick just one favorite when each and every one of them is magnificent in their own special way?

For additional information on Great Sand Dunes National Park & Preserve, be sure to visit the National Park Service web site (link HERE).
Posted by MARY at 5:00 AM