This post represents another installment in The Big Switcheroo series – tales from last spring’s epic journey from the northeast to the Florida Keys and back – involving family, friends and an extraordinary range of adventures.

I commented in my last post how much Alan and I enjoyed the slow pace of our relaxing visit with Alan’s brother and sister-in-law, Tom and Joan, at their home near the Gulf Coast of Florida.  That wonderfully slow pace would continue as we worked our way down to the Florida Keys, and that made us happy campers, indeed.

When our all-too-short family visit was concluded, we pointed our truck toward the east and headed for our next destination – Ortona South, the Army Corps of Engineers (COE) campground located at the Ortona Lock on Florida’s Okeechobee Waterway. 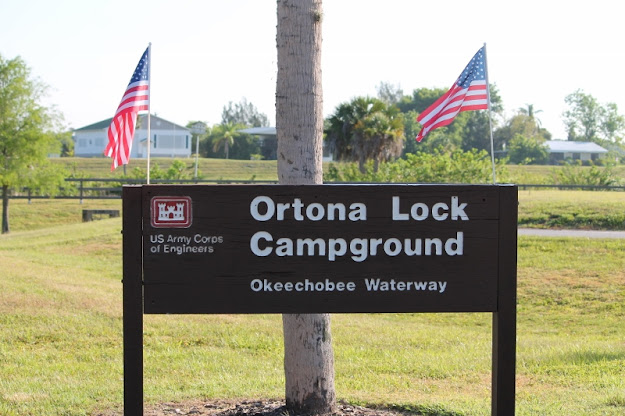 We were drawn to this campground for a couple of reasons.  The first is that we’re big fans of COE campgrounds due to the well-designed facilities and the low cost of camping.  The second is that, as boaters, we love campsites on lakes and waterways, even if we don’t have our kayaks or power boat with us.  At the Ortona South Campground, our site was right on the Okeechobee Waterway.  But what was more interesting than the fact that we were on the Waterway is what was in it!

At first glance, the Ortona South Campground doesn’t look like much.  If you’re looking for social hot spots and night life, you’re out of luck.  If you’re looking for a quiet and relaxing time in a nature-rich location, then Ortona South would, most likely, be an appealing camping location.  I had my first nature lesson immediately upon arrival, when I decided to use the campground restroom before we settled into our site.  There was a sign on the door of the building which housed the restrooms that stressed the door should remain closed.

I thought that was unusual – and then I realized why those were critical instructions at Ortona South.  Waterway + Florida = Alligators!  Merriam-Webster defines “circumspect” as “careful to consider all circumstances and possible consequences.”  One look at that sign on the restroom door and I immediately became circumspect.  I opened the door slowly, and peeked around the corner.  Then I stealthily checked every stall before I used one.  It would be way too embarrassing to report that I’d been attacked by an alligator while using the restroom.  You can bet that, every time I left the travel trailer during our stay at Ortona South, I would open the door and take a good look around before stepping out.  One of the last things I’d like to be is a tasty tidbit for a sneaky alligator.

The day we arrived at Ortona South, we didn’t actually see any alligators, just a log floating near the grass at the edge of the Waterway and a few pleasure boats out on the water.  It wasn’t until Tom and Joan came to spend the afternoon with us the next day – and Joan pointed out our “first” alligator in the Waterway – that we realized the “log” we saw the day before was actually an alligator.  Yikes!  At least the black bears in our neck of the woods can’t be mistaken for something else.  Like a forsythia bush or something.  As you may have concluded (and rightly so), I'm not a fan of alligators.

Once I accepted the fact that alligators were simply going to be part of our stay at Ortona South, it was easy to look beyond them to the most intriguing feature of the campground – the Ortona Lock.  The Okeechobee Waterway is a popular and fairly direct route from the west coast of Florida to the state’s east coast, so it gets quite a bit of pleasure boat traffic.  Having boated on the Erie Canal, Alan and I are familiar with the process of locking through, and we enjoy watching other boaters traverse the locks when we’re not in them ourselves.

In anticipation of our stay at Ortona South, Alan packed his marine radio so that we’d be able to pick up communications between boaters and the lock master.  The lock was just a hop, skip and a jump away from our campsite.  Alan quickly headed over there the morning after our arrival when he heard the lock master advise the captain of a pleasure boat to enter the lock at “dead slow” because there were manatees in the lock chamber.

Of course, I assumed the manatees were stuck in the lock but, no, not so!  While watching the boat lock through, Alan had an interesting conversation with the lock master.  She told him that the manatees were quite proficient at traveling the Waterway.  When the lock gate opens, the manatees enter the lock chamber from the Waterway, swim to the other end, and patiently wait for the water level to change and the exit gate to open.  Over time, these intelligent creatures have learned how the lock operates, and have adapted their habits to allow them to travel the Okeechobee Waterway at will.  Amazing!

One difference we did notice between this lock and those in the Northeast was the rate at which water was allowed to enter and leave the lock chamber.  The lock masters here at Ortona allow the water level in the chamber to change much more quickly than the lock masters along the Erie Canal.  It could be that, in Florida, the sheer volume of pleasure boaters using the locks makes it necessary to speed up the process a bit; however, the faster the rate of flow, the greater the potential for turbulence in the lock.

The more turbulent the water, the more difficult it is to control your boat in the lock.  Keep in mind that you can’t tie your lines tightly to the pipes or railings in the lock chamber because the change in the water level is too great – you’d break your lines or damage the cleats on your boat to which your lines are tied.  Boaters need to be able to react quickly as the water level in the lock changes.  That’s why they only circle the vertical pipes, railings or ropes in a lock chamber with their lines and simply hold onto the lines until the boat is ready to exit the lock.

Within the Ortona South Campground is a feeder stream that runs into the Waterway.  That stream proved to be a delightful source of nature-related entertainment.  Although Alan and I are not birders, we do enjoy seeing the variety of feathered friends we encounter on our travels.

In addition to birds, we also enjoy watching animals – big and small – in their natural habitats.  That little feeder stream was a hotbed of activity!  The number of birds and other creatures visiting or inhabiting the water was simply enthralling.

The most delightful entertainment was provided by a family of otters.  Omigosh!  They were just too cute!

Alan and I have always had a soft spot in our hearts for both river and sea otters, and this playful bunch just reinforced the warm feelings we get whenever we’re privileged to enjoy their antics.

I had booked our stay at Ortona South because it was a COE campground and the Ortona Lock would be right outside our door.  I didn’t know that it would be the best nature-oriented experience of our entire trip but, as it turned out, it was.

Since I would never want to lead you astray, I’d like to mention one difficulty we did have at Ortona South.  The dump station was not operational when we arrived.  It appeared that it had just been refurbished (there was some evidence of fresh concrete, as I recall), and it had not yet been re-opened by the COE for use.  Since Recreation.gov has our email address, it seems to me that they could have easily notified anyone with camping reservations in place that the dump station would not be operational between certain dates.  As it was, posted signs indicated that the dump station would be open by the day of our departure, but that turned out not to be true.  Additionally, the Camp Host at Ortona South was the least helpful of any Camp Host we’ve ever met.  Usually, Camp Hosts go out of their way to be warm and welcoming, as well as provide assistance to campers.  But this guy was definitely not following the program.  Plus, he kept promising to find out if we’d be able to use the dump station at another nearby COE facility, but he never followed through.  Luckily, since our stay at Ortona South was only for a few nights, emptying our tanks there would have been convenient, but it wasn’t necessary.  That may not have been the case for others.  And that, my friends, is the ONLY negative experience we’ve ever had at an Army Corp of Engineers campground.

But, that’s okay.  The otters and the manatees made up for it, and the view of the Waterway out our big back window was picture perfect.  We truly had a happily memorable stay at Ortona South – and not just because we didn’t get eaten by alligators.  Spending the afternoon there with Tom and Joan, listening to the boat chatter, watching so many pleasure boats lock through, enjoying all of God’s critters going about their business, doing what critters do, was just a ton of fun.  Would we return to Ortona South?  You bet we would – in a heartbeat!  But we might call ahead to be sure the dump station is open.