This post represents another installment in the series detailing the second of our three cross country National Parks camping trips with travel trailer in tow.  At the time of this trip in 2010, our son, Ryan, was 16 and our daughter, Kyra, was 11.  We were on the road for 4 weeks and 1 day.

Alan and I have been tent camping since we were married 40 years ago.  But it wasn’t until 2006 that we purchased our first travel trailer.  That first “RV summer,” Ryan was 12 and Kyra was 7, and we started out by frequenting private RV parks with amenities and activities that we felt the kids would enjoy.  It was on our first cross country National Parks camping trip in 2007 that we tested the waters of dry camping (camping without water, electric or sewer hookups) in Yellowstone National Park’s Madison Campground.  We discovered that we loved waking up in the Park surrounded by nature instead of other RVs.  The space, solitude and scenic views we experienced at Madison ignited our passion for camping in State and National Park campgrounds.  The rest, as they say, is history. 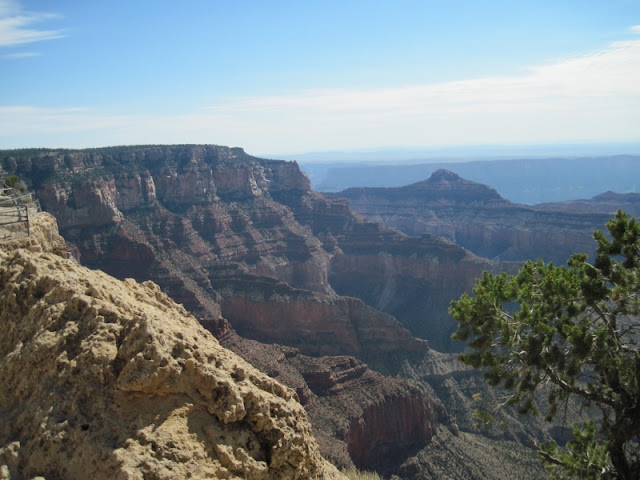 Let me refresh your memory of where we left off on this trip.  In the last installment of this series (which was at least several months ago - YIKES!), we had visited Mesa Verde National Park in Colorado.  From there, we headed southwest toward Grand Canyon National Park.  Because we also planned to visit a number of National Parks located in Utah on this journey, we had set our sights on the North Rim of the Grand Canyon.  It would have been wonderful if we had the time to visit both the North Rim and the South Rim, but our vacation days had been carefully meted out, and we couldn’t afford to spend the 9 hours it would take to drive to the South Rim and back toward Utah. 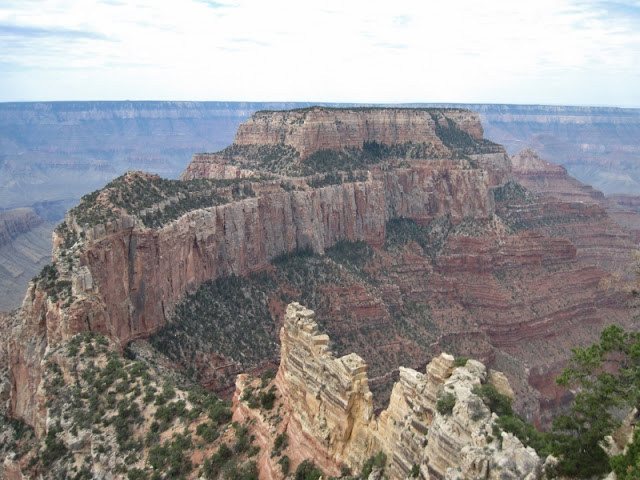 Alan and I had visited the South Rim back in the day (before kids) when he was traveling more for work and I would tag along so we could extend the trip into some vacation time for us.  It is true that the South Rim offers many more viewpoints and those iconic and seemingly never-ending vistas of the Canyon – which truly is “Grand” in every sense of the word.  But the South Rim also has more visitors per year and, while you can still get away from the crowds by heading out further on the trails or choosing less traveled ones, more people is still more people - a situation we try to avoid whenever possible.  The North Rim is heavily treed in some sections, and that makes us feel much more at home.  It’s not that we don’t enjoy the magnificent scenery of the desert southwest; it's just that we simply feel more comfortable with the familiar.  When I found out that the North Rim Campground actually had a couple of RV sites overlooking a portion of the Grand Canyon that sealed the deal.  By this time, we were pretty much trying to camp within the State and National Parks we were visiting and only choosing private RV parks when necessary.  While our stay at the Madison Campground in Yellowstone was the exception to the rule back in 2007, our visit there pretty much upended our camping style to the point where, by 2010, stays at private parks were now the exceptions.  So, it was with happy anticipation that we looked forward to visiting the North Rim and its campground. 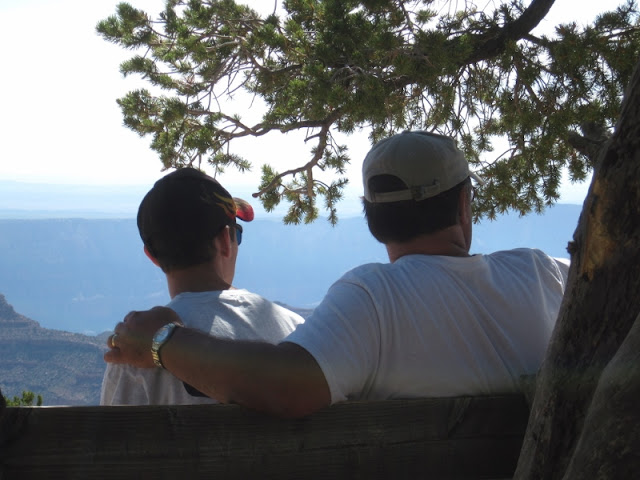 I am definitely an overachiever when it comes to planning.  My style would, I’m afraid, frustrate some people to no end.  But I love nothing better than to dig, dig, dig through guide books, blogs and travel articles to find those little tidbits of information that will elevate a stay in a campground or the enjoyment of a destination to a higher level.  Finding out that there were a few campsites at the edge of the Canyon (no, not right at the edge – don’t be silly!) made slogging through those countless campground reviews worthwhile.  I really do work hard at both finding the most delightful campsites and then working my way through the reservation systems to book them.  Yup, I am that person who will be sitting at the computer at midnight if that’s what it takes.  Lucky for us, my overzealous research and planning habits have paid off on many occasions with one of the best being our stay at the North Rim.  Our campsite was within a stone’s throw of Transept Canyon, one of the Grand Canyon’s many “branches.”  To wake up reveling in the pleasure of already being in the Park is one thing.  To wake up knowing that you’re camped at the literal edge of one of the Seven Wonders of the World, is both humbling and mind-boggling, and brings new meaning to the phrase, “life on the edge.”  It’s one of those experiences that I keep tucked away in both my mind and my heart and, every once in a while, I drag it out just so I can enjoy it all over again. 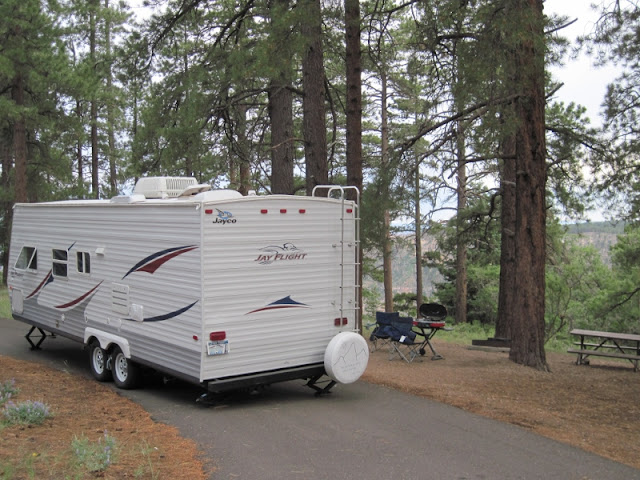 Beyond considering our nearly one-in-a-million campsite, the North Rim of the Grand Canyon itself is spectacularly magnificent.  It might be just my perception, but a visit there seems more personal, somehow, than a visit to the South Rim.  And I think it’s more than just about the number of people.  At the North Rim, the Canyon seems less imposing and more approachable.  The viewpoints were fewer but the views are still stunning.  Camping amid the trees was cool (literally and figuratively) and the pace felt much more relaxed.  Exploring the North Rim of the Canyon engenders a certain form of quiet contentment. 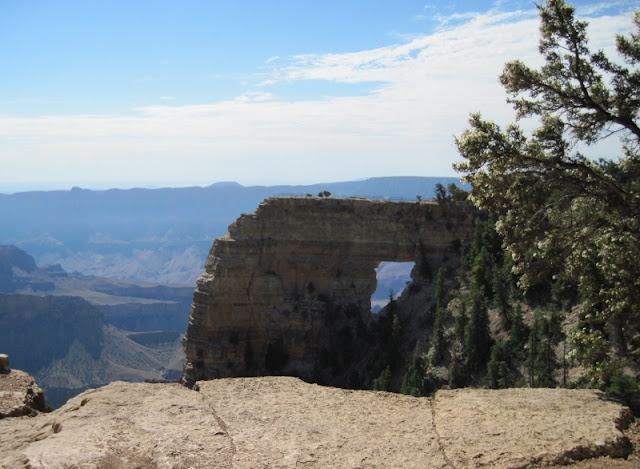 I do hope that, if Ryan and/or Kyra return to the Grand Canyon, our kids take the time to visit the South Rim, so that they have the opportunity to enjoy another facet of the Park.  For me, it’s the North Rim that will always hold my favor.  Comparing the North Rim to the South Rim is like comparing a quiet evening around the campfire with family and friends to attending a grand celebration at one of the hottest venues in town.  They might both be enjoyable and memorable events, but I know which one I’d choose, hands down, every time. 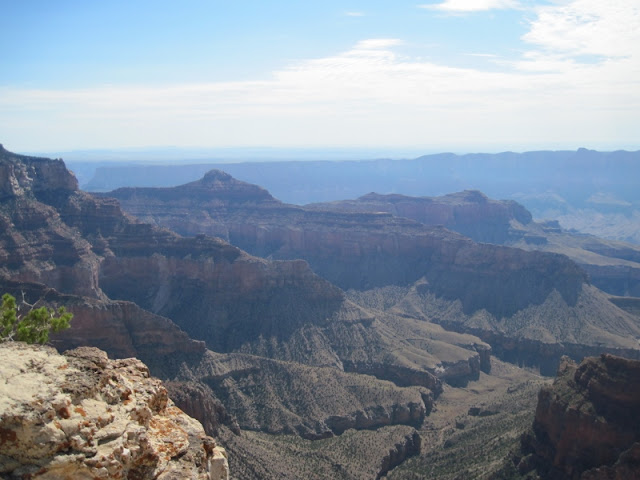 Please know that I personally believe photos of the Grand Canyon simply do not do the Canyon justice.  Certainly, professional photographers have captured exquisite images that I never will, but I believe it is still one of those places that you have to see to believe – to believe its magnificence, its beauty, its majesty and even its creation.  It is no wonder that it is one of the original Seven Natural Wonders of the World. 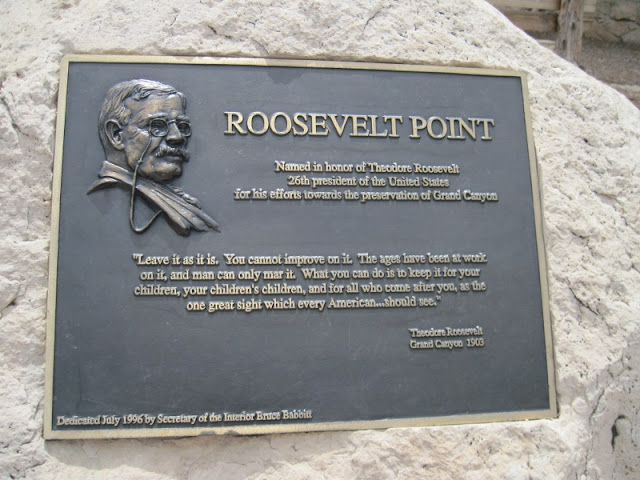 Grand Canyon National Park is celebrating its Centennial this year, thanks to the foresight of Presidents Benjamin Harrison, Theodore Roosevelt and Woodrow Wilson.  Harrison first protected the Grand Canyon by naming it a forest reserve in 1893; Roosevelt followed by designating it a National Monument in 1908; and Wilson ensured additional protection for the Grand Canyon by naming it a National Park in 1919.  You will find plenty of information about the Grand Canyon on the National Park Service web site (link HERE).  Be aware that, due to a major waterline replacement project scheduled for 2020, reservations at the North Rim Campground will be first come, first served only from May 15, 2020 to August 31, 2020.  Normal reservations will resume on September 1, 2020 through the remainder of the 2020 season.
Posted by MARY at 5:21 PM